How Much Sodium Should We Eat?

The American Heart Association has suggested to reduce this to 1500 mg because it considers our population to be “salt sensitive,” or “special.”

According to the Centers for Disease Control and Prevention, the special populations – individuals with hypertension, African-Americans, middle-age, and older adults – now account for 68% of the American population. Because these specific population groups now constitute a majority of the total population, the 1,500mg should apply to all populations.

The U.S. Department of Agriculture has released the same guideline as of June, 2010 – that daily sodium intake be reduced to 1500 mg or less for the entire population.

http://youtu.be/Tkx1fqN3Ts8 What Makes a Healthy Breakfast? I debated which recipe to share when my ...

END_OF_DOCUMENT_TOKEN_TO_BE_REPLACED 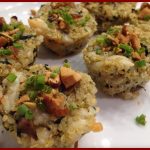 END_OF_DOCUMENT_TOKEN_TO_BE_REPLACED

What makes a good all purpose gluten-free flour blend? You can choose from a number of pre-made ...